"He possessed a strong personality with a generosity so great that it extended to everyone with whom he came in contact. He was a true Christian gentleman, honorable and upright in all his dealings..."
Lancaster Excelcior, June 30, 1932 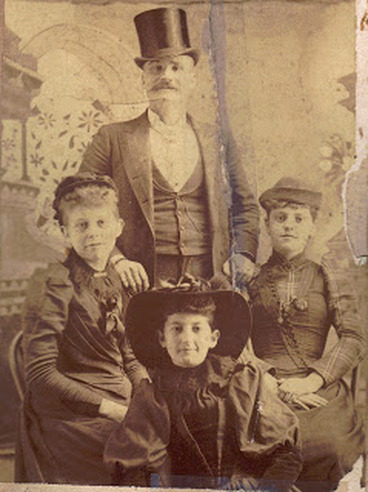 William P. Hall, his wife Sadie, and two daughters, Sidney and Wilma. (Before the birth of their son). Schuyler County Historical Musuem

Hall was a member of the Independent Order of Odd Fellows, Schuyler County chapter, and the Freemason's Lodge of Love #259 in Lancaster.

"He never failed to respond when called upon to aid
when his efforts might help one in need."
Lancaster Excelsior, June 30, 1932

"Even several years after his death, Lancaster natives still related how that as children they admired him and even rode some animals."
Ronald Johnson, Nomination for the National Registrar of Historic Places, 1974

“After acquiring the house, the historical society held an open house and auction. Everyone important attended - the mayor of Kirksville, the mayor of Lancaster, Missouri politicians, local bankers, and even the
Mayor of Cape Town, South Africa.”
Bob Cline, Bandwagon Magazine, January 2011

Hall left behind a legacy - not one of material things, but one of determination  - he proved that anyone can make a difference. He rose from the dust, and with determination made millions doing what he loved; he then returned to that same rural Schuyler County dust a very fulfilled man - having made world-wide ripples along the way.


Hall made a tremendous impact on the horse and circus industries and on the town of Lancaster. "The Horse King of the World" altered history, selling thousands of horses to generals in South Africa and allies in Europe. "Colonel" Hall also changed circus history when he spent years buying from and selling to small traveling circuses, thus changing their future. Hall's determination, hard work, and generosity saved a town and changed history.