“Hall self-proclaimed himself, 'The Horse King of the World,' and it appeared on his stationary in 1909." Bob Cline, letterhead, Fred D. Pfening, III archives

"Hall is the most remarkable man I ever knew.... he was a genius at mathematics and a 'regular gypsy horse trader'."  ~William Woodcock, Sr., Elephant Trainer
Tom Parkinson, Bandwagon Magazine, Jan./Feb. 1964

“Locally, he was called ‘the lightning horse buyer.’ It was said that there was none other in the United States who knew a horse as well or could tell in so short a time what it was worth.”
The Schuyler County Republican, March 15, 1907

"No Order Too Small or Too Large" 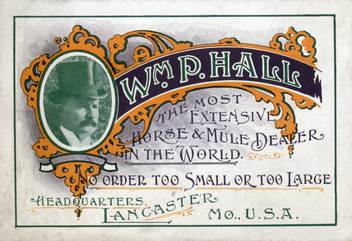