"Mr. Hall played an important part in putting Lancaster 'on the map.' It was through the realization of his dreams that he made Lancaster
the center of wonder."
Lancaster Excelsior, June 30, 1932 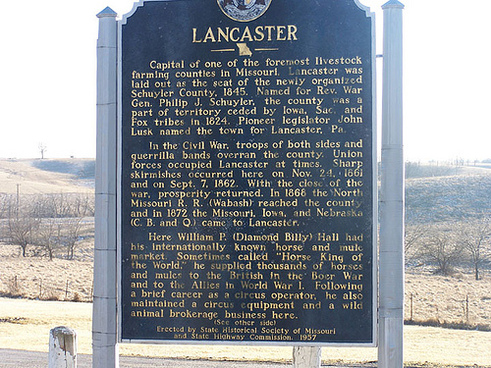 This plaque stands on US Highway 63, near the intersection of Highway 202. Photo Lauren Kramer

Hall contributed significantly to Lancaster's economy and added a cosmopolitan air to the town."
Rhonda Chalfant, A Recodation of Buildings in Lancaster, Schuyler County, Missouri, 2009

“[Farmers] knew they could sell all they produced to Billy Hall.
It doesn't take long to see how large an economic boon
Hall was becoming to the surrounding area.”
Bob Cline, Bandwagon Magazine, January 2011

In 1893, Reading Railroad declared bankruptcy, causing widespread panic. People withdrew money from banks, which lead to bank closures, business failures, and unemployment. However, "Schuyler County was spared from this panic because of Hall’s continued success and expansion of his horse business,” stated Cline. In 1929, the Great Depression began. If Schuyler had been a typical rural county, it would have died, but because of Hall's generosity, it survived. 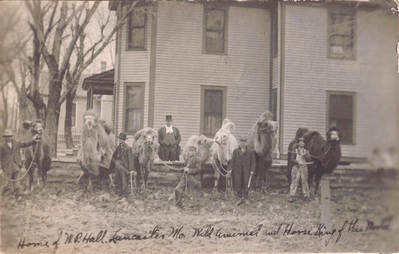 "Hall in front of his house with camels and their handlers." Fred D. Pfening, III archives 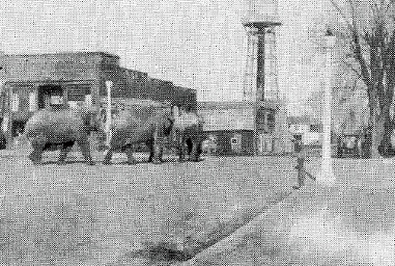 "These three elephants, Tommy, Ding, and Boo, were no stranger to roaming Lancaster's town square on a daily basis. They were called The Big Three." Bobby Poston, Chariton Collector, Fall 1981

"I remember my mom telling me that when she was a little girl, Hall's elephants roamed around the town. There was this one time her
house started shaking and everyone ran outside thinking it was
an earthquake. It turned out to be an elephant scratching
his back on the side of their house!"
Dianna Kinney, Schuyler County resident.


"My Dad told me that his job as a boy was to get the milk off the porch as soon as the milkman brought it, because the elephants
would come and drink it!"
Lee Wheeler, former Schuyler County resident

"My Dad used to take elephants on walks around the square. He told me about a time when he took Sidney the elephant into the courthouse.
She walked all around and stuck her head into the offices
to see what everyone was up to."
William "Buckles" Woodcock, Jr., former Schuyler County resident